Rome, the eternal city and the capital city of Italy one of the world’s most visited cities. The city of Rome is known throughout the world for its numerous landmarks some of which are centuries and millennia old. Here are some of London’s most visited and prominent landmarks. 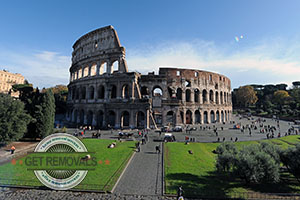 The Coliseum also known as Colosseum is beyond any doubt the most noted landmark of the city. In many ways the Coliseum has become the symbol of the city and tends to attract both local and foreign visitors by the number. The Coliseum was commissioned by Roman Emperor Vespasian who didn’t live to see its completion in 80AD. The construction of the Coliseum as carried out by his son Emperor Titus. Further modifications were made on the Coliseum during the reign of Emperor Domitian. Today the Coliseum is one of the world’s most visited touristy sites and is considered to be one of the seven wonders of the modern world.

St. Peter’s Basilica is another high profile landmark of the Italian capital. The basilica is located in Vatican City and is perhaps the most famous Catholic Church in the world. The construction of the basilica began during the early years of the 16th century and ended in during the first half of the 17th century. St. Peter’s Basilica was consecrated on the 18th of November, 1626. Today the basilica is undoubtedly the most visited monument within Vatican City and one of the most recognizable religious edifices in the world.

The Roman Forum is another highly visited local sites. The forum is a complex that comprises of the ruins of several Ancient Roman government buildings. The complex is located in the heart of the city in close proximity to the aforementioned Coliseum. Today the Roman Forum tends to attract millions of visitors on a yearly basis and is one of Italy’s and Europe’s most famed touristy hot spots.

Altare della Patria also known as the Monumento Nazionale a Vittorio Emanuele II is perhaps Rome’s most famed memorial. The monument was built between 1885 and 1925 and commemorates Victor Emmanuel, who was the first king of unified Italy. The monument is 70 meters tall and is described as a must see site by travelers.

If you are interested into going to Rome, you can do it either after a successful removal or just because you have always wanted to visit the capital of Italy. Even more you can always decide to relocate from London to Rome and vice versa. Just make sure that you use removal services to ease the entire moving process.

Know that Rome has many more wonders which you can explore during your travel to the eternal city.