Sweden has always been an example of efficiency, high-end engineering, innovation and technological advancement. Rubbish removal and waste management throughout this Nordic country make no exception. Currently, the Swedish government is aiming to increase the country’s recycling rate and bring it to a total of one hundred percent, at the moment it is standing at the impressive ninety nine percent.

The facts about Swedish waste management are a clear sign of how committed the government, and society as a whole are, to reducing waste and recycling pretty much every item and material. Some quick figures to give a better indication: 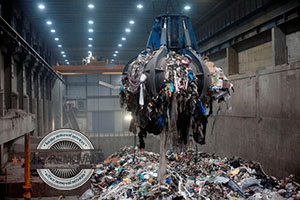 Swedish government adheres to a policy of not only recycling, but creating energy from waste generated by large urban communities. This takes place in specially engineered processing plants or industrial sized waste incinerators. The first waste incinerator in Sweden was built in Stockholm in nineteen o four.

At the moment, hundred and ten years after the first such facility was put in operation, Sweden can pride itself on having thirty three fully functioning waste incinerators.

In twenty twelve, incinerators in Sweden burnt 2 270 000 tonnes of household waste in order to create energy. The electrical energy created by burning waste (in controlled environment) which cannot be otherwise recycled or reused was enough to power quarter of a million households. The heat produced by burning that waste was also enough to heat up an excess of eight hundred thousand households.

Rubbish removal industry and waste management experts in Sweden are seeing something quite amazing – an almost total revolution of rubbish processing and management throughout the country. To put things in perspective, in nineteen seventy five (forty years ago) Sweden was recycling or reusing only thirty eight percent of waste generated by the community. As mentioned above, that same rate or percentage is now at ninety nine – not much else can be said.

Efficient waste management and sufficient recycling rates require good infrastructural planning and access to waste processing facilities, and that means access for all members of the community. In result, of the so called waste management revolution which took place in Sweden, now there are special-purpose recycling plants no further than three hundred metres away from every built up area in the country.

Swedes separate recyclable household waste at home which is compulsory – much like other countries around the world. The waste is then taken outside and placed in special holding containers, in turn these are collected and processed by local rubbish removal authorities. In result, statistics have shown that Swedish people throw out the least amount of waste.

The next step in the Swedish waste management revolution would be reduction of waste burning (although it created heat and electricity) in favour of reusing. Reusing discarded materials will in fact have double positive effect for the country. First it will be more beneficial for the environment, second it will be also beneficial for the economy. How so?

In the case of Sweden, specialists say it is more economical to reuse materials, rather than use new raw materials for the manufacturing of new products.