Load securing in professional property removals is one of the most essential aspects of the moving process itself. At the same time, UK health and safety regulations which apply to specialised property removals also require drivers and operators to secure their loads properly thus making the process of load securing a law imposed requirement. When transporting goods and valuables from their origin location to another destination removal personnel must secure the load for two main reasons – avoiding damage to items themselves during transit, and prevention of traffic accidents caused by unsecured loads.

In the UK, where the professional property removals industry is well developed both economically and technically, national regulative bodies have conducted research and experimentation into how and when are loads best secured and not posing any danger to other motorists and the driver themselves. Failing to secure a load of valuable goods and items during transit from A to B is likely to have a negative effect on the service provider i.e. the moving company because this would mean damage has been caused to customers’ belongings thus rendering the removal service economically unviable. From a road safety’s point of view, an unsecured load can be a real traffic hazard. In most cases, when a load is unsecured or not secured properly it causes the removal vehicle to be unbalanced. Centre of gravity is usually offset by unbalanced loads which means the vehicle itself is less stable during cornering or when being driven at higher speeds. In result, UK regulative bodies have stated the following: Loads transported inside a vehicle’s cargo compartment/section should be secured in such way so that there is no movement relative to the trailer bed during transportation. 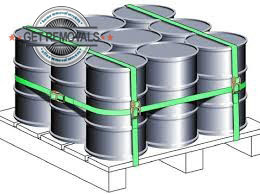 Years of research into road safety and cargo transportation have allowed authorities to come up with a set of general rules and regulations applicable to load securing prior to transit. At the same time, UK authorities have realised that service providers (removal companies) being at the forefront of the industry are faced with load securing issues and specifics on a daily basis. Therefore authorities have allowed companies to apply their own load securing methods as long as these provide the necessary safety and do not break any additional road rules and health and safety regulations. The official regulations state that any method for securing a load which does not infringe rules and regulations is acceptable and considered good work practice.

The type of load being transported is likely to require a specific securing method or approach. For instance – load securing may involve two things: load securing and load restraining, these are not the same, though many loads require a combination of both in order to have them transported safely and efficiently. Another important issue to consider when securing a load (either using restraining or containment, or both) is weight distribution. Transport vehicles although engineered properly, do not have the same low centre of gravity as passenger vehicles, as such they need to be properly balanced which is achieved through correct loading and securing procedures distributing cargo weight evenly across the chassis of the vehicle. Restraining and containing loads properly will help maintain correct weight distribution. 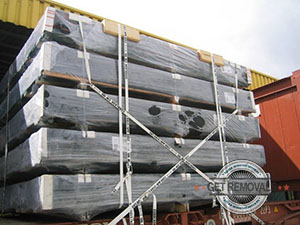 Another essential aspect to consider when securing a load inside a vehicle’s cargo compartment is actual attachment of the payload to the rigid structure of the vehicle itself. UK health and road safety regulations state that securing loads to the curtains and weather protection structures of the given vehicle is highly unadvisable as this is not considered a sufficiently strong structure of the vehicle thus making it unsuitable for load securing.  Instead, removal personnel should seek sturdier, lower situated anchor points to which lashing equipment and strapping is to be attached.

In certain cases, friction between items inside the vehicle’s cargo compartment may provide a fall sense of security so to speak as initially items fitting snugly against one another may seem well secured. UK regulations do not support this and strongly advise removal personnel to refrain from using load friction as means of securing. In the instance of a sudden turn, emergency stop, t-bone impact etc. load secured by friction alone can become a dangerous projectile abler to cause serious injury, extensive property damage or even worse.

In general, UK authorities advise removal company personnel to secure loads properly, and if necessary to use a number of securing methods. Whether that be ropes, straps, belts, hooks, tensioners etc. Over strapping for instance proved to be the least-risky method to secure a load, making it one of the preferred options. When choosing the ‘safest’ method to secure a load prior to transit, it is ok to think outside the box in order to make the process more efficient, but this must be done within reasonable limits and not compromise safety in any way. Experimenting with new load securing methods should not be done on the road.

Indeed there are certain costs involved in securing a load properly. It takes more time and effort to secure a load– translating to additional labour costs, longer service times, perhaps slightly higher service costs incurred by customers (though this is highly relative). This however should be factored in against the potential consequences (and subsequently the costs) associated with load shifting causing damage to valuable goods and items, delays in transit, or causing damage to the transport vehicle itself. In worse case scenarios, dangerous load shifts can cause personal injury, road accidents or even worse, all of which make service providers liable before law.

Some basic safety tips and advice for when securing a load: Always maintain active and effective communication between all removal personnel involved in loading and unloading, securing and distributing weight load. Authorised/Qualified personnel should do a risk assessment prior to commencing loading and securing operations. Coordinators should devise and stick to a pre-made loading plan. Thinking the operation through in advance will help removal personnel and their coordinators identify any potential issues or weak spots which must be addressed in order to alleviate any potential problems during loading and transportation.