There are numerous waterparks in Europe and in this article we will present you the best of them. 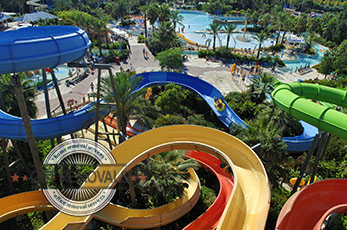 Costa Caribe Aquatic Park – Located in the city of Salou in Tarragona, northern Spain this waterpark was founded in 2002 and spreads over an area of over 30.000 square metres. It has a total of 27 attractions and 14 water slides including the renowned King Khajuna Slide which is the highest freefall slide on the continent with a height of 30 metres. The aquatic park lies in close proximity to the Catalan city of Barcelona which means that you can use the opportunity to visit Gaudí’s city while you are in the region.

Skara Sommarland – Founded in 1984 by Bert Karlson, Skara Sommarland is situated in the city of Axvall. It is the largest waterpark in Scandinavia and has a total of 40 attractions and 3 rollercoasters.  The park has a campground with a capacity for 800 tents and caravans. It also has a site with 300 cottages which can be rented by Skara Sommarland’s visitors. The tallest slide is called the Big Drop and has a height of 21 metres.

Sandcastle Waterpark – The Sandcastle Waterpark is the largest indoor aquatic park in the United Kingdom. It was established in 1986 and mimics a tropical climate environment. The amusement park has a total of 18 slides including the highly renowned Aztec Falls that fly out the users out of the edifice and in again. The Montazooma mat slide is another well-known attraction due to its 360 degree loops. The trip to the Sandcastle Waterpark can be the ideal way to recharge the batteries after a tiresome relocation. Know that you can drastically ease your move by using licensed commercial or domestic removal services.

Aquariaz – Situated on the border between France and Switzerland, Aquariaz is home to some of the biggest, longest and fastest water slides in the world. The facility is surrounded by a tropical garden and has astonishing views of the close by mountains. The Slidewinder is the most acclaimed attraction of the park as it is a watery half-pipe which is ridden with the aid of an inflatable. It is currently one of the most visited aquatic parks in Europe.

Alton Towers Waterpark – Established in 2003, the Alton Tower Waterpark has 7 pools and 10 slides. The amusement park gained international prominence when it banned men from wearing Speedos in 2009. The park imitates a tropical lagoon and is open for visitors all year long. The most noted slides of the aquatic facility are the Wacky Waterworks Tree House and the Master Blaster Water Coaster. You can reward your children for their hard work during your relocation by taking them to the Alton Tower Waterpark. But before you do so, make sure that you arrange the final details with the removal contractors that provide you man with van services.